150 years ago today the Battle of Hoke’s Run was fought between the Union army of Robert Patterson and Stonewall Jackson’s Brigade. The Union attack on Richmond was in two columns, Patterson in the Shenandoah and McDowell near Washington, DC. Patterson moved out across the Potomac River on the morning of July 2nd. But as they moved toward Hoke’s Run, they encountered Confederate resistance, Stonewall Jackson’s brigade of Johnston’s army. The Union force had 20,000 soldiers, Jackson had only 2,000. 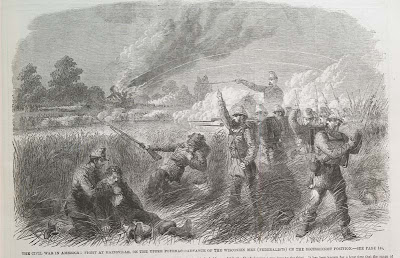 Jackson had been ordered not to attack the advancing force. He was told to delay the Federal advance, retreating slowly when some pressure was applied. When news reached him of the Federal advance, he ordered one to strike camp, one with a battery of artillery to march toward the enemy and two to remain in reserve. The lead Confederate regiment soon was under attack by two Federal regiments attempting to surround it. Jackson ordered them to fall back, seeing that otherwise they would soon be captured. Jackson withdrew three miles in good order. With Jackson as well was J.E.B. Stuart with a force of cavalry. He attacked the right flank of the Unions, and was able to capture a company of the enemy intact. At the end of the day both forces were intact. The next day Patterson continued his advance, but after that he halted for almost two weeks. This halt would prove important in the coming Battle of Bull Run.

The Battle of Hoke’s Run was a relatively small battle. Union casualties were 10 killed, 18 wounded and 50 captured. Jackson suffered 11 wounded and around 10 captured.