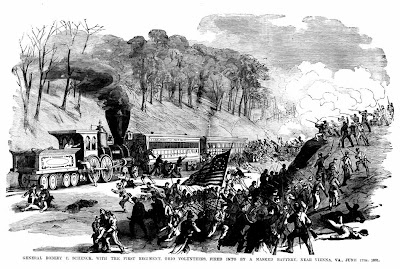 150 years ago today Robert Shenck was ambushed on mission from Washington. McDowell sent him on a reconisance mission with his troops. As they reached Vienna, Virginia, the train that was carrying them was ambushed. Two Confederate cannons fired shot, shell and canister into the train. Shenck ordered his soldiers off the train, formed them into line and attacked the enemy. The engineer of the train uncoupled the cars, and ran off abandoning them to the enemy. They were greatly outnumbered, but the Confederates retreated, believing that more troops were on the way. Shenck was able to escape with just a few casualties, but this skirmish made the Union advance much more cautious the next time.