The Pilgrim’s “First Encounter,” with the Natives, as they themselves called it, is rather famous. I recently came across a similar event that happened just a few years earlier and a few miles away. This post will just give the first hand account of the two skirmishes, and the next one will compare, contrast and evaluate them.

In October 1608, a French expedition, of which the famous explorer Samuel de Champlain was a part, was on the coast of Cape Cod, in modern Stage Harbor, near Chatham, Massachusetts.1 The expedition was in the midst of a small crisis. For some time they had been in friendly contact with the Natives, but it seemed that their mood was changing. The French sailors were ordered to embark due to chance of coming danger, but some had refused. Five of them stayed the night on shore, eating some freshly baked cakes. We will let Champlain pick up the tale:

The next day, in the morning, the 15th of October, the savages did not fail to come and see in what condition our men were, whom they found asleep, except one, who was near the fire. When the saw them in this condition, they came, to the number of four hundred, softly over a little hill, and sent them such a volley of arrows that to rise up was death. Fleeing the best they could towards our barque, shouting, ‘Help! they are killing us!’ a part fell dead in the water; the others were all pierced with arrows, and one died in consequence a short time after. The savages made a desperate noise with roarings, which it was terrible to hear.

Upon the occurrence of this noise and that of our men, the sentinel, on our vessel, exclaimed, ‘To Arms! They are killing our men!’ Consequently, each one immediately sized his arms; we embarked in the shallop, some fifteen or sixteen of us, in order to go ashore. But, being unable to get there on account of a sand-bank between us and the land, we threw ourselves into the water, and waded from this bank to the shore, the distance of a musket-shot. As soon as we were there, the savages, seeing us within arrow range, fled into the interior. To pursue them was fruitless, for they are marvelously swift. All that we could do was to carry away the dead bodies and bury them near a cross … and then to go here and there to see if we could get fight of any of them. … Three hours afterwards, they returned to us on the sea-shore. We discharged at them several shots from our little brass cannon; and, when they heard the noise, they crouched down on the ground to avoid the fire. In mockery of us, they beat down the cross and disinterred the dead….2

11 miles and 12 years later, the Pilgrims had their own encounter with the Indians. They had gone off exploring in a shallop with a party of 18 men. They related what happened as follows:

[W]e fed upon such victuals as we had, and betook us to our rest, after we had set out our watch. … After prayer we prepared ourselves for breakfast and for a journey, and it being now the twilight in the morning, it was thought meet to carry the things down to the shallop. Some said it was not best to carry the armor down; others said they would be readier; two or three said they would not carry theirs till they went themselves, but mistrusting nothing at all. As it fell out, the water not being high enough, they laid the things down upon the shore and came up to breakfast. Anon, all upon a sudden, we heard a great and strange cry, which we knew to be the same voices [that had been heard in the night] …. One of our company, being abroad, came running in and cried, “They are men! Indians! Indians!” and withal, their arrows came flying amongst us. Our men ran out with all speed to recover their arms, as by the good providence of God they did. In the meantime, Captain Miles Standish, having a snaphance ready, made a shot, and after him another. After they two had shot, other two of us were ready, but he wished us not to shoot till we could take aim, for we knew not what need we should have, and there were four only of us which had their arms there ready, and stood before the open side of our barricade, which was first assaulted. They thought it best to defend it, lest the enemy should take it and our stuff, and so have the more vantage against us. Our care was no less for the shallop, but we hoped all the rest would defend it; we called unto them to know how it was with them, and they answered, “Well! Well!” every one and, “Be of good courage!” We heard three of their pieces go off, and the rest called for a firebrand to light their matches. One took a log out of the fire on his shoulder and went and carried it unto them, which was thought did not a little discourage our enemies. The cry of our enemies was dreadful, especially when our men ran out to recover their arms; their note was after this manner, “Woach woach ha ha hach woach.” Our men were no sooner come to their arms, but the enemy was ready to assault them.

There was a lusty man and no whit less valiant, who was thought to be their captain, stood behind a tree within half a musket shot of us, and there let his arrows fly at us. He was seen to shoot three arrows, which were all avoided, for he at whom the first arrow was aimed, saw it, and stooped down and it flew over him; the rest were avoided also. He stood three shots of a musket. At length one took, as he said, full aim at him, and after which he gave extraordinary cry and away they all went. We followed them about a quarter of a mile, but we left six to keep our shallop, for we were careful about our business. Then we shouted all together two several times, and shot off a couple of muskets and so returned; this we did that they might see we were not afraid of them nor discouraged.

Thus it pleased God to vanquish our enemies and give us deliverance. By their noise we could not guess that they were less than thirty or forty, though some thought that they were many more. Yet in the dark of the morning we could not so well discern them among the trees, as they could see us by our fireside. We took up eighteen of their arrows … some whereof were headed with brass, others with harts’ horn, and others with eagles’ claws. Many more no doubt were shot, for these we found were almost covered with leaves; yet, by the especial providence of God, none of them either hit or hurt us though many came close by us and on every side of us, and some coats which hung up in our barricade were shot through and through.3

In the next post, we’ll examine these two events and see where and why they differed. 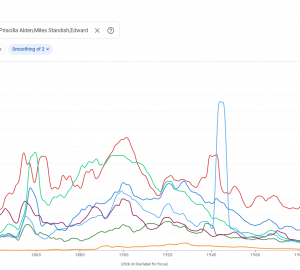