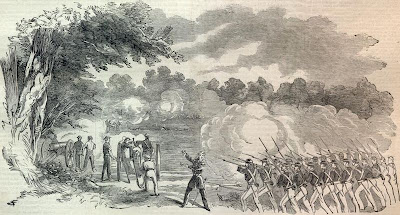 Another small battle happened today in Missouri as well. General Lloyn, commander of the federal troops there, had set out for Jefferson Sity, the capital, with 1,500 men. The General Sterling Price, commander of the Missouri militia, retreated along with the governor. General Lyon moved up the river with his troops in steamers, to drive them out of Boonville, where they had taken up camp. They advanced on June 17th toward the camp, with skirmishers ready to guard against any attack. Coming upon the Confederate line, he deployed his artillery, and the shells quickly drove them back. The militia conducted an orderly retreat, skirmishing with the Federals as they went. They abandoned their camp, and moved into the Southern part of the state. Lyon captured 60 prissoners, two cannons, and supplies of rifles and equipment.

Construction of the CSS Virginia